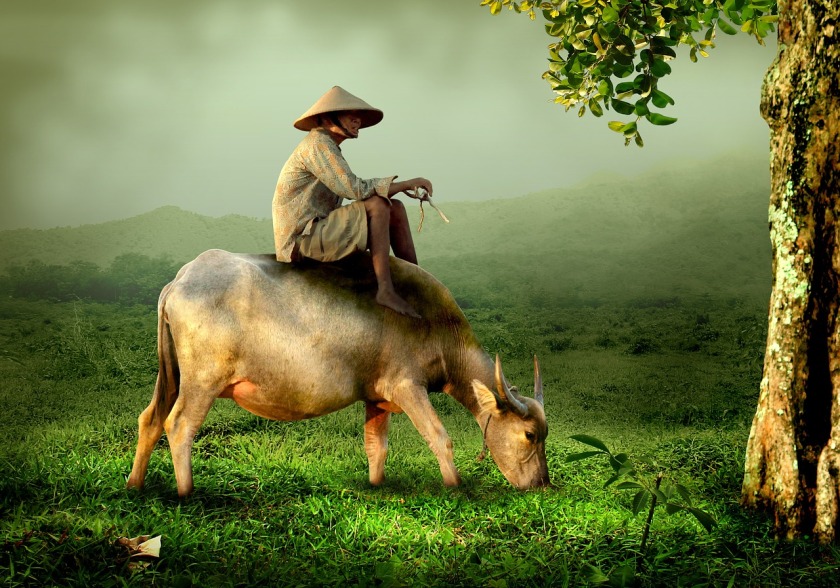 A farmer, his young son, and their donkey were making their way into market, where the farmer intended to sell the donkey.

As they passed a house, a neighbor jeered at them. “What fools! See how they walk when they have a perfectly good donkey?”

So the farmer, feeling embarrassed, had his son ride on the donkey. Later they passed a group of old men. “See?” said one of the men. “This goes to my point: the youth today have no respect for their elders. Here a tired old man is forced to walk while his young, lazy son rides at his side.”

Again embarrassed, the farmer had his son dismount and sat upon the donkey’s back himself. Soon enough they came upon a group of wash women. “What a cruel old man!” said one of the women. “Riding so easy while his little son struggles to keep pace.”

So the farmer had his son join him on the donkey and they rode together into town. There a man hailed them. “What a burden to place on a donkey! That’s too much weight. I’d say the pair of you are better suited to carry that donkey than he is to carry the pair of you.”

The lesson: In life you’re going to meet a lot of very well-intentioned people who think they know what’s best for you. They’ll question your choices and offer you their opinion of what’s best. A lot of times they’ll be wrong. Trust in yourself. Don’t let other people kill your dreams. Pick the path you think works best for you and don’t let the well-intentioned people in your life push you off that path. You may be wrong and things might not work out the way you think they will. That’s OK. Just be true to yourself and understand that missteps are still steps, and as long as you don’t lose sight of your chosen path you’ll eventually get where you want to be.

***adopted from a random blog post on the internet***

PS: If you are tired of pleasing other people and would like to chart your own path join us TODAY Friday 25th October 2019 starting 6.00pm at the Roots restaurant on Akii Bua road next to Nakasero hospital for our second MONEY TALK. The theme of the MONEY TALK is “Investing your money safely”. Our guest speaker will be Susan Namaganda who is the Head of Operations at Crested Capital. Susan handles most of my investments in Treasury bills, bonds and shares. She has a wealth of information on capital markets and other investment options. Participation fee is only 50k per person. Please inbox or contact us on 0788 437543 to confirm participation as slots are limited to only 15 people.